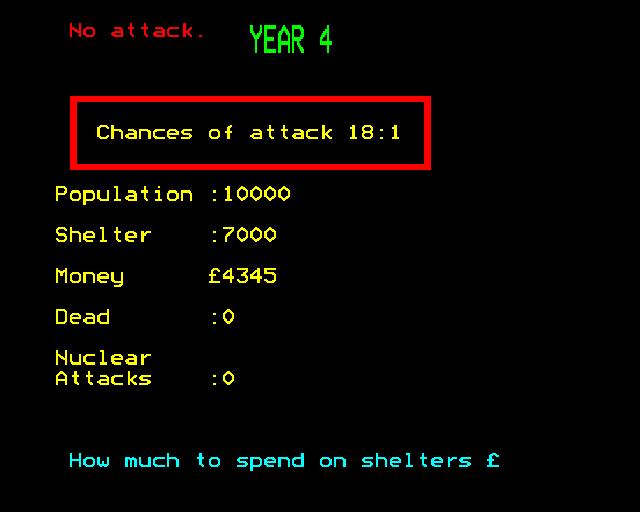 The scenario for this game, written by Tim Rogers, is not particularly pleasant. Your city is the target for a number of nuclear bombs, and your job is to protect as many people as you can from the nuclear blast. If you have strong objections to the basic idea behind this game, you could still use the new framework to produce a game of your choice, protecting a toy factory from an invasion of wicked gnome-missiles or whatever you like.

The game fits into the general 'Kingdoms' category, that class of computer games which attempts to model reality in some way. These programs expect you to make decisions about the expenditure of limited resources in order to acquire items which are needed for the continued existence of your city, country of planet.

In this case, your resource is money, and you need to buy as much shelter as you can, in order to save the maximum number of people. This analysis of the game suggests that any scenario requiring you to buy a single resource to achieve a specific aim could be slotted into the framework of this program. Essentially, all you would need to change would be the print statements.

The idea, then, is to protect as many people as you can from a nuclear blast. You start off with an amount of money which steadily increases as the game progresses. You must decide whether to buy shelter and use up most of your money, or to save it in order to buy the largest possible area of shelter later on. The only problem with this latter idea is that a nuclear attack could be launched when you have no shelter at all. And if you have no shelter, there will be no survivors.

In most Kingdom-type games, the ruler is assassinated, impeached, lynched or otherwise disposed of, if a certain proportion of the people in his or her care die, whether the deaths occur from famine, plagues of rats, attacks by muscle-bound Norsemen in long boats, or - as in this case - from a nuclear blast. If more than half your city is wiped out, the hitherto complacent masses (or, at least, those who have survived) will rise up in one coordinated movement and wipe you and your family out.

You must balance your delay in spending money for shelter against the fact that, in this game, the longer you delay, the more likely a nuclear attack becomes. This chance increases and, at the end of the game, it is close to one in one.

Full instructions are included within the game.