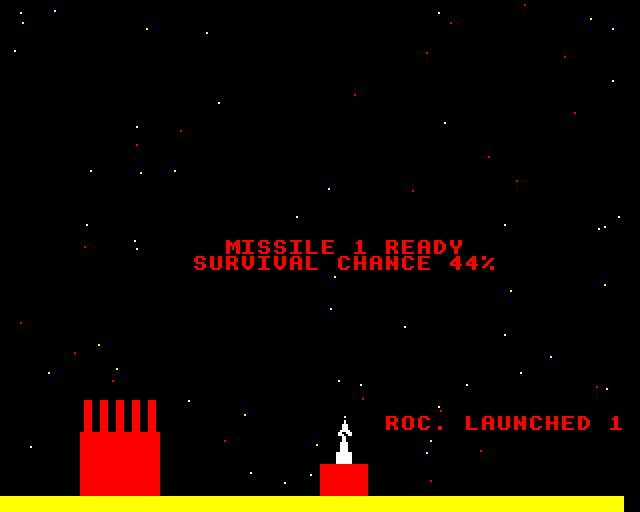 Published on the Best Of PCW Software For The BBC Micro compilation from Personal Computer World magazine. These compilation cassettes were published by Century Communications Ltd. The accompanying book states that the program was originally written by John Gooderson for the TRS-80 computer, and published in Personal Computer World in April 1981. The program was converted for the BBC Micro by Philip Lindsay. The book also contained the following description:

A game for up to four people, acting as commanders of their own missile launching sites. Their task – to defend a nuclear power station against a rocket attack: all they have to do is to shoot down the rockets!

The Commander can control his missile by using the numeric keys 1-5, and the space bar; the former guide the missile's left/right bearing, and the latter gives it emergency boost as it nears its target. Failure to hit the rocket means that the power station under threat is likely to have a lump knocked out of it! Each Commander can volunteer for up to three postings on active service, assuming that the strain is not too great. End-of-posting reports are produced which give success/failure ratings, together with recommendations as to the Commander's future career development!