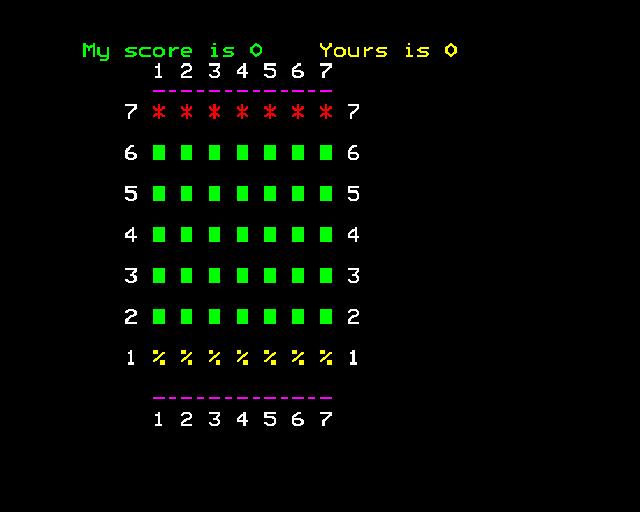 Published in the book Games For Your BBC Micro, published by Virgin Books Ltd.

An almost identical listing was also published in the book Games BBC Computers Play, published by Interface Publications, also in 1983, which gives Tim Hartnell as the author.

Knightsbridge is a game played on a seven by seven board, with each player having seven chess knights as pieces (which explains the name). The computer throws a die which determines which piece the human player must move, then it throws a die for itself to determine which piece it must move. All pieces move like knights in chess (and you are not allowed to cheat) and a piece is captured by the opponent landing on top of it. The first player to capture five of the opponent's pieces wins.

You move the indicated piece by telling the computer which square you wish to end up in. The board is labelled one to seven along the top and bottom, and from seven to one down the sides, as you can see from the sample run. You enter the number along the side (e.g. 6) then the number along the top (e.g. 4) as a single number (i.e. 64) to move your piece onto square number 64. You will be swiftly chastised if you try to cheat. You can concede at any time by entering 99 when asked for your move.