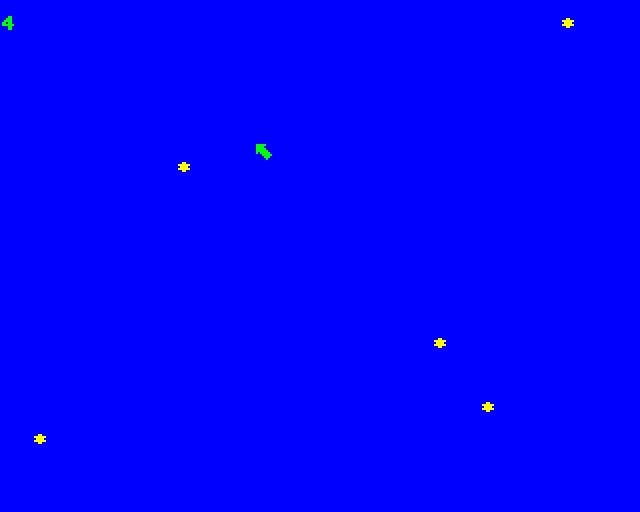 Published in the book 21 Games For The BBC Micro by Mike James, S. M. Gee and Kay Ewbank, published by Granada Publishing Ltd. The book contains the following description:

This is a very exciting and fast moving space fight game that uses sound effects and some rather unusual graphics techniques to good effect. The screen is treated as if it were a spherical universe. So, if you go off the top of the screen you re-appear at the bottom, and if you go off at the right, you re-appear at the left. This game is a race against the clock. You have a hundred seconds in which to annihilate the enemy ship with your infallible laser weapon − the chase is on.

At the beginning of this game you have to select a difficulty factor. This governs the unpredictability of the enemy ship’s course and the number of stars that appear. The stars act as obstacles in this game. If you hit one you will be deflected at random so the fewer there are the easier it is to steer your course. Your ship moves continuously and is shaped like an arrowhead and can point in any of eight directions. Every time you press any key it turns clockwise through 45 degrees. The enemy is a revolving cartwheel-shaped disc that meanders through space. To fire your laser press the ‘up arrow’ key. Your weapon will fire in a straight line from the point of your arrow. If you hit the enemy ship it will disintegrate with appropriate sound and visual effects. The time taken is constantly displayed at the top left of the screen and when it reaches 100 your time is up.