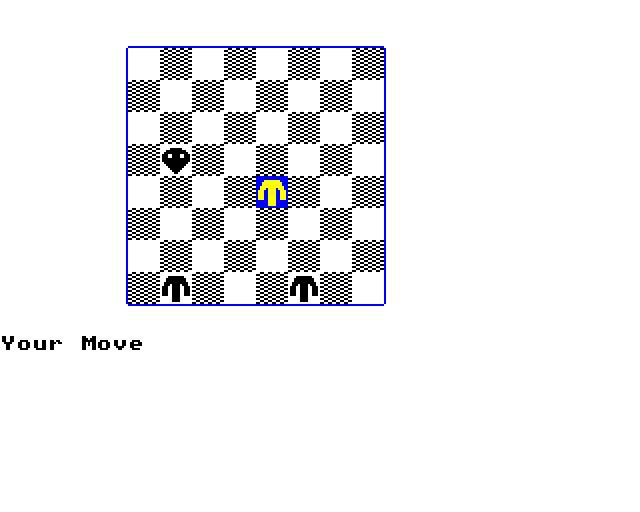 What on earth is a ‘quark’? Well may you ask that question, but to find out you’ll have to play this game. Here are just a few clues. The game is played on an eight-by-eight checkered board and the object of the game is to trap the quark and prevent him from reaching the bottom of the board. To do this you have two, three or four (determined at random) pieces, or ‘quatlins’, which can be moved diagonally one square at a time and only up the board. The quark also moves diagonally but he can move both forwards and backwards.

At the beginning of the game your quatlins (two, three or four of them according to the luck of the draw) are ranged along the bottom line and the quark is at the top of the board. It is your move first. You’ll notice that one of your quatlins is displayed in different colours from the rest. This is the piece that is ready to move. If you want to move another piece hit any key and control will pass to the next piece in an anti-clockwise direction. Try pressing keys to see this in operation. When you are ready to move a piece press the left arrow key if you want to move diagonally forward left and the right arrow key if you want to move diagonally forward right. Once you have moved, the quark will make his move automatically and its your turn again. The BBC Micro will display a message when the game is won, either by you or the quark, but if you want to resign before this, type “R”. Just in case you hit this key by mistake you will be given the chance to reconsider and will have to answer “Y” or “N” to the question “Resign?”.