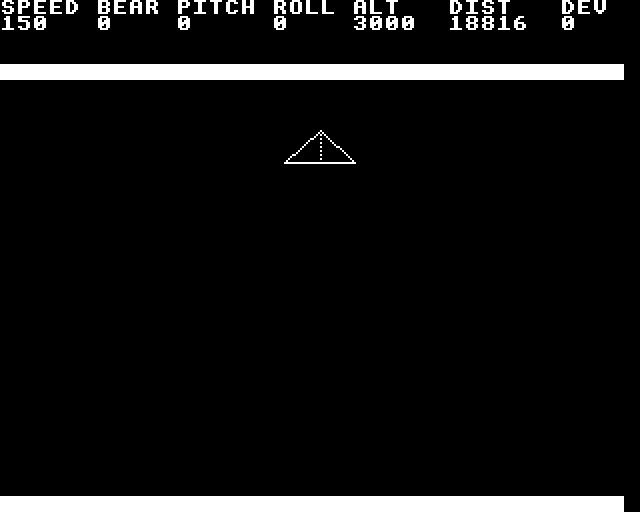 This program puts you in the position of a pilot faced with landing his aircraft safely on the airport runway. By using different control keys the plane has to be guided down at the right speed, and at the right time, to ensure safe arrival of all aboard.

A continuous display provides a pilot's eye view of the approaching runway. In addition, a number of instrument readings give essential details of such things as altitude, speed, direction, pitch, roll, and distance from the runway. Keys may be used to manoeuvre the aeroplane in terms of its speed, roll and pitch, the pilot's efforts being reflected in the instrument readings. Realistic sound effects accompany the simulation, which will soon discover whether you can say with honesty "I'll take good care of you!"

The identical description was also contained in the book accompanying the PCW Games Collection, which also added the following:

The distance reading indicates the distance you are from the end of the runway. As the runway is 2000m long you must touch down when this reads 2000m or less. At touchdown, yaw speed must be between 45m/s and 55m/s. Your pitch and roll must be less than 3 degrees and since the runway is 100m wide, the deviation readout must be within +/- 150m. After touchdown, you can use the rudder to correct the direction of travel, and your brakes to slow down to zero.

Your instruments give the following information:

SPEED airspeed in metres per second (m/s).
BEAR bearing is the direction in which yaw aircraft pointing: 0 = straight ahead, positive values to the right, negative to the left (in degrees).
PITCH negative values when the aircraft's nose is pointing down, positive when up.
ROLL roll causes the banking to change, which alters the aircraft's bearing; positive values clockwise, negative clockwise.
ALT height above ground in metres.
DIST distance from the far end of the runway in metres.
DEV sideways deviation from the centre of the runway.