The Crypt Of Gabon 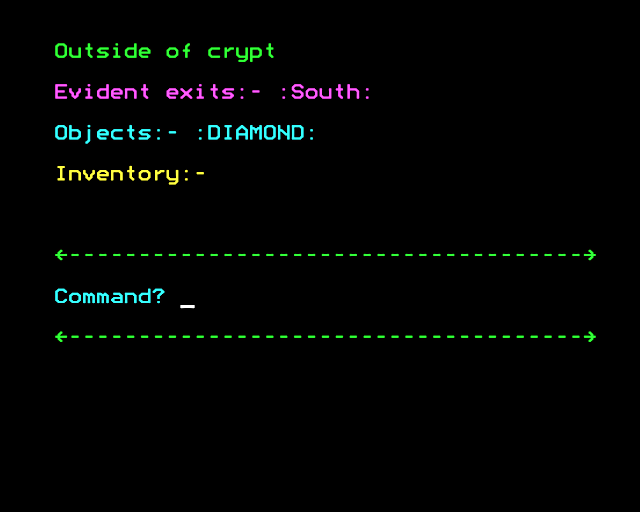 In this ADVENTURE program, written by Ian Watt, you start outside the crypt.

A stolen diamond must be replaced in it's correct position within the crypt, before you make good your escape. The crypt, needless to say, is guarded by a monster which will destroy the world if the diamond is not replaced. The ambition of monster's know no bounds. You have a limited time before you will be killed by the monster, which was designed by Gabon, who is buried in the crypt.

You have to direct the computer to manipulate the objects you come across, and to move around. As with all good ADVENTURE programs, much of the pleasure in playing comes from discovering the vocabulary the computer will understand, so we will not give too much away in the introduction. The computer has, however, an extensive vocabulary, so if one command doesn't work, try another.

The program has been written so that only the first three letters of each command and object need to be typed in, although the computer will also accept the full word. For example, if you wished to say GET DIAMOND, the BBC Micro will accept GET DIA or GET DIAMOND. Other examples: DROP REVOLVER – DRO REV; THROW ROPE – THR ROP.

Good luck in your quest.