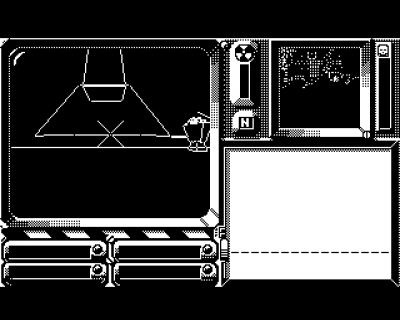 Cholo is a 3D wireframe video game. Gameplay is somewhat similar to that of the 2D game Paradroid.

Before the war, man hid in nuclear bunkers and programmed robots to patrol the surface of the earth … However, the robots have had ideas of their own and want the planet to themselves … Initially, you control a rebel 'Ratdroid' with which you must capture other robots and work out how to penetrate the fortress the robots have built over the humans' bunker … Different robots have different abilities: some can fire, some can fly, some can fix other robots and some can 'hack' and find passwords … The city you explore is made up from 2,000 structures including buildings, trees and pyramids. [Acorn User]

If you are playing this game on a real BBC Micro fitted with a Datacentre, then *DTRAP must be set to ON